Sorry for the lack of updates .. everyone had been busy with their lives..

Anyways, here's the trailer for Jay's next movie which will be out January 2011

Anyone excited about Jay, speaking english???
Written by Leen at 7:43 PM No comments:

TAIPEI: Taiwan superstar Jay Chou as admitted in a recent interview with a Taiwan men's fashion magazine that he feared marriage.

The singer, who was once romantically linked to soon-to-be-married television host Patty Hou, told the magazine that he did not have an urge to marry despite Hou's impending nuptials.

"Sometimes, I am glad that I am not the guy getting married. Watching them march into the wedding hall, having a wife and children, actually feels like a mirror which tells me not to get hitched too early. My heart will cry out that being single is great," said the 31-year-old.

He also could not understand why the public is interested about his future marriage plans.

"I don't understand why everyone is so concerned, my mother is not even worried," said Chou.

When asked if he liked a certain type of girl, Chou said that he "did not have specific requirements" but believed it was important to have "the right feeling" when choosing a girlfriend.

As to whether he will put his girlfriend first, Chou revealed that he is no sellout and that his friends will always rank highly on his priority list.

"When I am in a relationship, I will focus on my girlfriend, but my buddies will remain very important to me," said Chou.

Share your thoughts on the mv right here ! =D

Personally I feel like it has a bit of ' Gei wo yi shou ge de shi jian' feel to it.

His album will be in mid May.

Thoughts on the song?
Written by Leen at 3:01 PM 5 comments:

TAIPEI: Taiwan television host Patty Hou is getting married "in the coming months" and former squeeze, singer Jay Chou, will not be present.

Speaking to the press at a Shanghai event on Wednesday, Hou, 32, readily answered queries from the media about her upcoming nuptials to banker Ken Huang, 34.

She said that after her high profile romance with Taiwanese superstar Chou, 31, she would prefer to stay low-key, also in respect of the wishes of her elders.

Hou also implored the media not to disturb her fiance as he is not a public figure and is not used to the limelight.

Revealing details about the marriage, Hou said she wants a very simple wedding with close friends and family. It will be in the coming months, though a date as yet to be set.

As to whether ex-boyfriend Chou is invited, Hou candidly answered, "He is a big star, [I] do not want to trouble him. Everyone's schedule is very tight, so I am not inviting celebrity friends." She joked that she did not want the big stars to outshine her on her special day.

Responding to pregnancy rumours, Hou replied negative. She does, however, look forward to having her own baby.

"I think I will have a baby one or two years later," she said. Although her child will be her top priority, she does not want to be a stay-at-home mum.

"I have not completely thought out the plan after marriage, but I feel that I like this job very much and hope to continue," Hou said.

Hou wants to have a daughter, and said that their relationship would mirror her own relationship with her mother, "just like sisters" with no secrets between them.

Like an annual affair, Jay Chou's decision to release his new album this May has left other singers scurrying to change their own release dates.

As of now, two former Golden Melody best singers, Gary Chaw and Wang Leehom, have confirmed changes in the dates of release for their upcoming albums.

The only big-name male artistes slated to release their album in May are the ensemble rock group Superband, but insiders observed that they have a different target market.

Taiwanese superstar Jay Chou currently has nine albums to his name, and barring the first self-titled album, has been the biggest-selling artiste in Asia.

After focusing on film and TV production for more than a year, with the critically panned The Treasure Hunter and Pandamen, and a cameo in the Yuen Woo-ping wuxia biopic True Legend, the 31-year-old will return to his first love, starting with the May album followed by a concert tour in June.

When contacted, Rock Records said Gary's English album is postponed not as a response to the above news, but because studio recording has been delayed.

Leehom's latest album, originally scheduled to be released last month, has been pushed back till after summer. 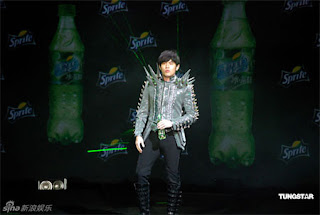 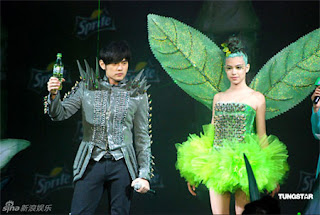 Pop megastar Jay Chou attended a promo event for a beverage brand on Thursday in Shanghai. Donning a metal tusk-studded silver-shining suit, Chou said his new album is due out in May, ending his two-year break from the pop music scene. The pop sensation also revealed his only solo concert this year is slated in June. [Photo: ent.sina.com.cn/TungStar]

In love with Jay? Chi-ling won't go there

THIS might be sad news for Jay Chou fans: The Taiwanese pop star/actor prefers not to have overly intimate scenes in his movies.

He wants to come across as a decent guy.

“It’s a matter of image, it’s very important. I cannot be kissing so freely,” said the 30-year-old star candidly in Mandarin, at a press conference held at Raffles City Convention Centre yesterday.

He was in town to promote his latest film, The Treasure Hunter, also starring Lin Chi-ling.

He added: “You don’t necessarily need to kiss to portray deep emotions.”

Chou was in town with Lin, 35, and Taiwanese director Kevin Chu to promote the action movie, which opens next Thursday.

The film, touted to be National Treasure meets The Mummy, sees Chou playing a roguish treasure hunter, Ciao Fei, who is forced to hand over a valuable map of a lost city in exchange for the life of his mentor’s daughter, Lan Ting (played by Lin).

Teaming up with a famous archaeologist, they set off to recover the map and protect the ancient treasure buried beneath the city.

Lin said the role – her second acting gig so far – is her most challenging one yet.

The leggy beauty had to film in a desert in Hengdian – a small town in Dongyang of central Zhejiang province of China – for three months, even suffering a cut to her face that became infected.

The two leads share a couple of romantic sequences in the US$15 million (S$21 million) film, but do not have any kissing scenes.

Nor can you expect any scenes where they tumble into bed together.

Rumour has it that Lin convinced the director to remove the only kissing scene with Chou.

When asked about it, Lin said Chu hadn’t had plans for any intimate scenes between the two at all.

“From the film, you can tell that the relationship between Ciao Fei and Lan Ting is a very pure and ambiguous one, with the characters not saying what they mean. He intentionally left a space for the audience to guess and imagine what their relationship is,” she explained.

Lin, who was first seen in John Woo’s 2008 historical epic, Red Cliff, added that her chemistry with Chou was “very good”.

“Filming with him was very comfortable as we knew each other before taking on this project,” she said.

“We can communicate well and give each other suggestions on how to act better... Jay is a very creative person, so his ideas inspire me to improve on my character,” she added.

When asked – given their chemistry – whether there were moments where she felt as though there might be a stronger connection, she smiled knowingly.

“I wouldn’t dare, he has too many fans,” she said with a laugh.

Just as well that Lin wouldn’t make a move on her co-star. Chou – who first broke out in movies in Hong Kong flick Initial D (2005), for which he won a Golden Horse Award – revealed that because of his star status, starlets are afraid to be seen with him.

“If we get shot by the paparazzi, people will immediately assume (that whoever I’m with) is my girlfriend. It is unfair for the girls,” he said.

“I don’t have any way of clearing my name, or theirs. The more I try to speak, the more mistakes I make,” he added.

Chou has been linked to pop star Jolin Tsai, as well as TV host Patty Hou and singer Jessie Chiang. Chou has been upfront with the media only about his relationship with Hou, whom he dated in 2005.

But he reassured the press that the next time he is with someone for real, he’ll confirm the relationship just so they won’t have to speculate, he said
wryly.

Chou’s star is on the rise, especially with his first foray into Hollywood.

He recently nabbed a role in the movie remake of The Green Hornet, alongside Seth Rogen and Cameron Diaz, and will be playing the superhero’s sidekick, Kato.

Filming is still ongoing in Hollywood, and the film is scheduled to be released in December next year.

Even though he has been in the entertainment industry for 10 years now, Chou said acting in Hollywood was still an entirely different ball game for him.

“Over there, I feel like I’m a newbie. I have to wait very long before getting started on filming my scenes) and I cannot speak too loudly. I have to be well-behaved. It was fun; a good experience,” he said with a smile.

Our dearest jaychou came to Malaysia yesterday for his new movie - The Treasure Hunt promotion. Newspaper said his fans waited him at Pavilion from 11am to 7pm-8pm oh my god, you can imagine the crowded. Ahhhh how famous is he! :) 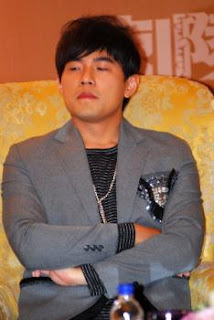 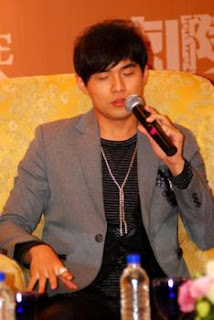 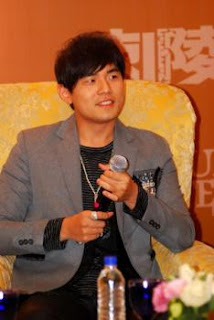 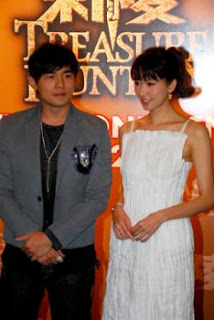 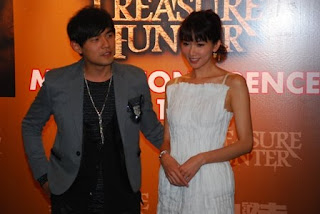 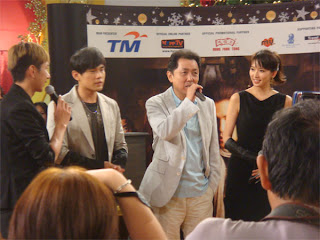 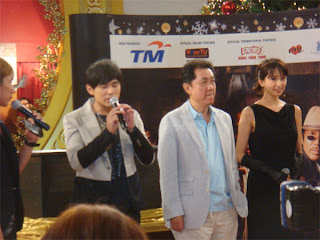 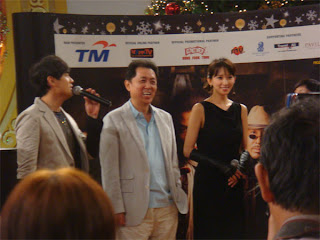 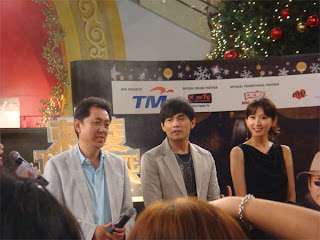 Pictures credits to jayc.com
The Treasure Hunter slash 刺陵 released officially today! As a jay fan, i will watch this movie as soon as possible because I absolutely love all of Jay's work. Yessss, jay fans, show your love and appreciate to JayChou. To those who want to go for a movie, trust me, The Treasure Hunter would be a great choice ;) By the way link to The Treasure Hunter's official website if you wish to know more about the movie. 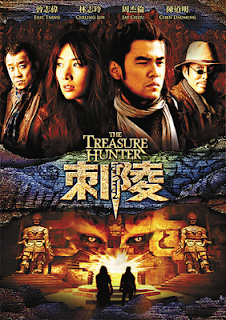 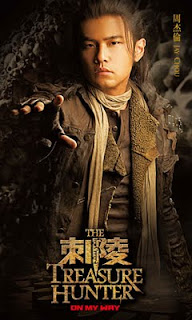 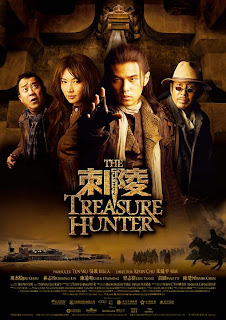 With the big movie of the year "The Treasure Hunter" showing in Malaysia RAM Entertainment and PMP Entertainment have invited male and female leads Jay Chou and Lin Chi Ling to come to Malaysia to do promotion. Take Note - 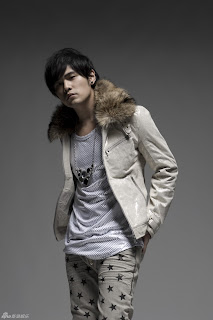 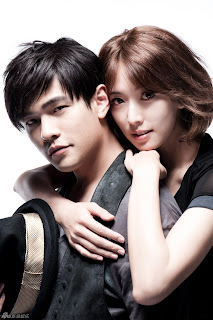 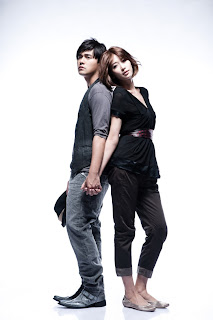 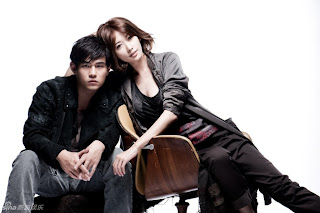 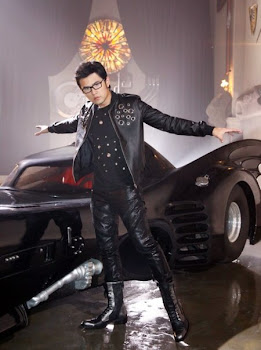 Who is this superstar ?

The one : Jay Chou

About how much we love him and his music. Wee ~~

Anyone who wanna join this blog,

please leave a tag at the tagboard~

These are a few guidelines in order to keep WLJC neat, clean and organized.

All authors of this blog must label their posts in the correct category. Select a category that suits your post. The purpose of labelling each post is for a better system for reference.

No official song request or downloading of any album of Jay here. These requests will be ignored.

We encourage members to update regularly, as much as possible about anything ranging from their lives to any Jay related subject.

Any bloggers that wish to contribute to WLJC can leave their name and email on our chat box and we shall invite you in our blogging team. The only condition : you are a Jay fan.

If you don't like Jay, please move away from this blog. Thx.

We only link blogs that belong to members of this blog. Sorry we don't do random linking to other blogs. [to be updated soon]